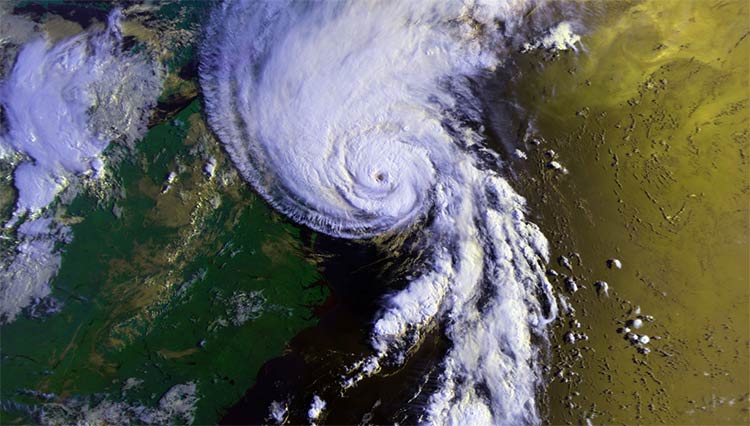 The day before Hurricane Bob struck the coast of New England, 10-year-old Luther Blount was 60 miles east of Nantucket on his father’s 77 foot fishing trawler, the Ruthie B.

The boat was at the eastern end of George’s Bank, and underground island thought to be one if the richest fishing grounds in the Atlantic. It was a warm day and a soft fog had drifted in around them. The deadly calm sea buoyed the boat gently, as tow rope with net dragged the submerged body of land for bottom fish-cod, flounder, mackerel, skate, as well as scallops and lobster.

This was Luther’s second fishing trip with his father, and the last before Labor Day and school. It was day seven of their twelve day excursion and Luther’s father, Bill, took note of the air currents and listened to weather reports, hoping Bob would mak land fall inland and not sweep up the coast. He did not want to head for home with half a load.

A change in the direction of the wind will indicate the path of the storm. This way, he said, he can judge the route of the hurricane and continue fishing until there is a real danger.

“I can sleep though a baby crying in the next room, but I wake up when the wind changes direction,” he said. “You learn to when your life depends on it.”

Luther passed his day watching for whales and dolphin, reading, and waiting for each catch to be lowered onto the boat. Every three hours or so he would suit up his yellow oil gear and race on deck to help the six man crew sort the fish by variety into bins where they were cleaned, bled, and transferred below deck to be iced.

The bluefish were for Luther and he would collect them himself to sell at auction in New Bedford. Then he would throw the small fish and yellow eels back in the ocean and collect the scallops and lobster. The hurricane warning held little meaning to him on such a bright and pleasant summer day.

At about 5 that evening, a catch was hoisted onto the deck-one lobster, one flounder, one sand dab and two skates-about a hundred pounds shy of the last catch. At first, Captain Blount thought there must be a hole in the net, but soon realized that nature was retreating from the storm. Taking heed of nature’s warning, he gave orders to head for Nantucket Shoals, another fishing ground closer to home. where they would be ready to run if and when the hurricane hit.

The Ruthie B. steered for Nantucket, doing one tow in route. By sunset the wind began accelerating and it was clear the hurricane was headed their way. When the boat reached Nantucket Harbor at about 3 p.m. the following day, the winds were over 100 mph.

The jetties as well as the buoys were submerged as the wind shrieked around them. Green water rose well above the 13 foot bow, and the radar was not functioning.

Captain Blount made the decision to ride the storm out in Nantucket Harbor, protected from the fiercest winds by the lee of the land.It was too dangerous to try and bring the boat in.

Gathered in the pilot house, the crew waited out the storm. The seas were too violent for any activity. Luther’s initial fear was replaced by wonder as he perched by the window and watched the waves break on the boat. He ate some crackers and pointed out the largest waves to his father. The waves would meet the wind and shoot straight into the air, Luther recalled.

The crew rocked back and forth, some of them sick, and prepared for the long, sleepless night ahead. Luther grew tired and retreated to his bunk, where he said he fell fast asleep with the rocking motion of the boat. “It was like a cradle,” he said, “except it made you queasy.”

Captain Blount kept the boat at a quarter angle with the wind so that it jogged with the storm, moving very little. After a rough four hour ride, the winds began to decrease and the boat headed for Nantucket harbor.

When Luther awoke about 8 p.m., the worst of the storm had passed and the boat was about to tie up at the dock.

Bill Blount said that Hurricane Bob was probably the most fearful for his wife Ruth. She was not relayed a message about her husband and son’s whereabouts until 3 p.m. the day of the storm, when the Coast Guard made radio contact and determined they were safe in the harbor. She fielded calls from the crew’s wives, one of who, was due to have a baby any day. She put the women at ease and remained calm, while she herself was unsure of the safety of the Ruthie B. and its crew.

It will be next spring before Luther gets a break from his third grade studies and another chance to accompany his father on a fishing trip. But he is ready.

“It’s scarier for me to have a grammar test, than it was to be in a hurricane,” said Luther. “My father said the best thing not to do was panic, and I didn’t.”

Asked about his aspirations after college, Luther looked up from underneath his yellow fisherman’s hat with a shiny black duck bill brim and said, “I want to be a fisherman.”