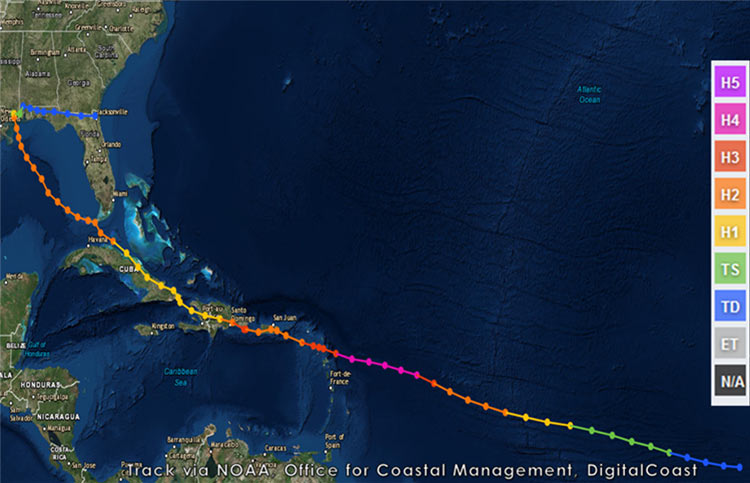 On the morning after, they sat nonchalantly on folding chairs atop of the marquee of the Old Strand Theater, now Ripley’s Believe-it-or-not Odditorium.

Nearly hidden by the huge ‘S’ ‘T’ ‘R’, they enjoyed the plates of baked beans and watched below The Great Clean Up on Duval Street. “We’re intact,” called down Christy Bremer, the general manager.

“Believe it or not,” said Rick Yule, the maintenance engineer.

It was one of the odder sights on a world-famous street that looked anything but in the wake of Hurricane Georges. But unlike the coastline areas of the island, Duval was pretty much spared.

On Lower Duval, bicycles left at a rack were on their sides, mangled beneath twisted tree branches. Sight-seers, some with video cameras, walked in the middle of the street, dodging fallen limbs and wires.

Above, helicopters droned through a grey sky.

Police cars cruised with loudspeakers blaring, “Full curfew in effect. Return to your home or shelter.”

But people seemed to pay more attention to the rumor that Rick’s bar was opening at 5 p.m.

For the time being, everything was still boarded up.

“I’ll give you $50 for an omelette and some taters,” a man in a Brooklyn College T-shirt said to a restaurant owner at the intersection of Caroline. In the distance, a huge uprooted tree blocked the view toward Whitehead Street.

At Eaton Street, three Navy men in camouflage uniforms were ready to pitch in with the clean up.

“We were out last night,” said Cmdr. Paul Mitchell. “A lot of trees and power lines are down but there is not a lot of structural damage. We’ve seen some damaged roofs.”

In the ground floor restaurant in the Holiday Inn La concha, a generator was up and running and coffee was being served.

“It takes 100 people to run this place, but now I’ve got only 15 – that’s why I’m sweating.” said Robert Lehman, the hotel’s general manager.

“I have 120 rooms full, all media, 50 news agencies. They’re even here from Japan, – The Washington Post, The Wall Street Journal.”

One guy asked for room service – no room service. Another guy wanted me to fix his TV – no TV.”

Lehman let locals into the hotel during the storm. “They were in the corridors playing scrabble. We didn’t put them in rooms,” he said.

Andrea Brody, a reported at NBC 6 in Miami, was having orange juice and a danish before going out to cover the storm’s aftermath. She rode out the storm with crew members in a Chevy Blazer.

“It wasn’t as bad as I thought it would be,” she said.

The foyer of the San Carlos Institute, at 516 Duval, was a haven for homeless veterans and other people in need.

“We had five vets, four people from the West Isle Club apartments and four from different businesses in the area who had no place to stay,” said Bill Coins, the institute’s manager. And we had a family with two kids – one 8 and one 7.

Collins said the landmark building held up “fantastically” in the fierce winds.

“We got a little water when the eye wall came back around, but everybody had a mop.” he said.

“John here (Vietnam veteran John Baldwin) was scared but he slept most of the time.”

Two blocks up, Dick Cami looked down from the balcony of his Crabby Dicks Restaurant at city workers trying to remove a tree that lay across Duval.

“I think this island is very, very lucky,” he said. “Can you imagine if it had been a Category 3 or 4? It is amazing.”

Cami said he had been getting phone calls from people all over the country.

“Morton Downey Jr. called me from L.A. yesterday. He’s looking at his TV and saying to me, “It looks like you’re going to get hit.”

“But all I got was a little water damage and a Styrofoam mermaid blew down. And we’re going to lose a lot of food that’s in the freezer. Lobster and shrimp and all those crabs. But what are we going to do?”

Like everyone, Cami wondered when the electricity would be restored. Estimates ranged from 24 hours to at least a week.

“Now we play the waiting game,” he said.

Back down on the street John Elmore, who had on a black Key West Police Special Operations T-shirt, was guarding a fallen tree, not letting pedestrians pass.

“I’m here assisting with the clean up and trying to keep people off the street,” he said. “Most people don’t know the curfew is in effect.”